It is not just because they are really good friends that we’ve been working together since The Foundry was conceived over a kitchen table in Camps Bay some twenty years ago. It just so happens that Chris Williams also responsible for making some of the best wine in the Cape.

This was something that was immediately vindicated when the maiden Foundry 2001 Syrah was awarded a five star rating (one of only 17 for the year) in the 2004 John Platter Guide.

With James acting as a sleeping partner (he needs to retain a low profile in the venture since his day job is managing Accolade Wines South African interests), Chris remains the main driving force in the winemaking and being the face of The Foundry.

He spent his apprenticeship under Georgio dalla Cia at Meerlust and did a ‘stage’ in Pomerol with Michel Rolland before, in 1999, leaving to set himself up as a consultant. During this period, he took on the challenge of winemaker at Delaire in Stellenbosch, but when Giorgio finally announced his retirement, the Myburghs invited Chris to return to Meerlust as Cellarmaster. He took up the post in time for the 2004 vintage. Apparently, during this period, his mail was still being delivered to the farm, such were his emotional connection to the estate. The condition of his return to Meerlust was that The Foundry could continue unhindered so, after three nomadic vintages, the project secured a more permanent home.

The partnership with Meerlust came to a close at the end of 2019, when, in his 49th year, he announced that he was leaving Meerlust to concentrate on The Foundry full time.

The Foundry has a new and permanent home in the Paardeberg at Staart, the farm that the Reid family bought in the late 2000’s. Apart from planting vines, there is also an existing, if rustic cellar. It’s where Eben Sadie made the first vintage of Columella in 2000. There are plans to bring the cellar up to 21st century standards over the next couple of years. 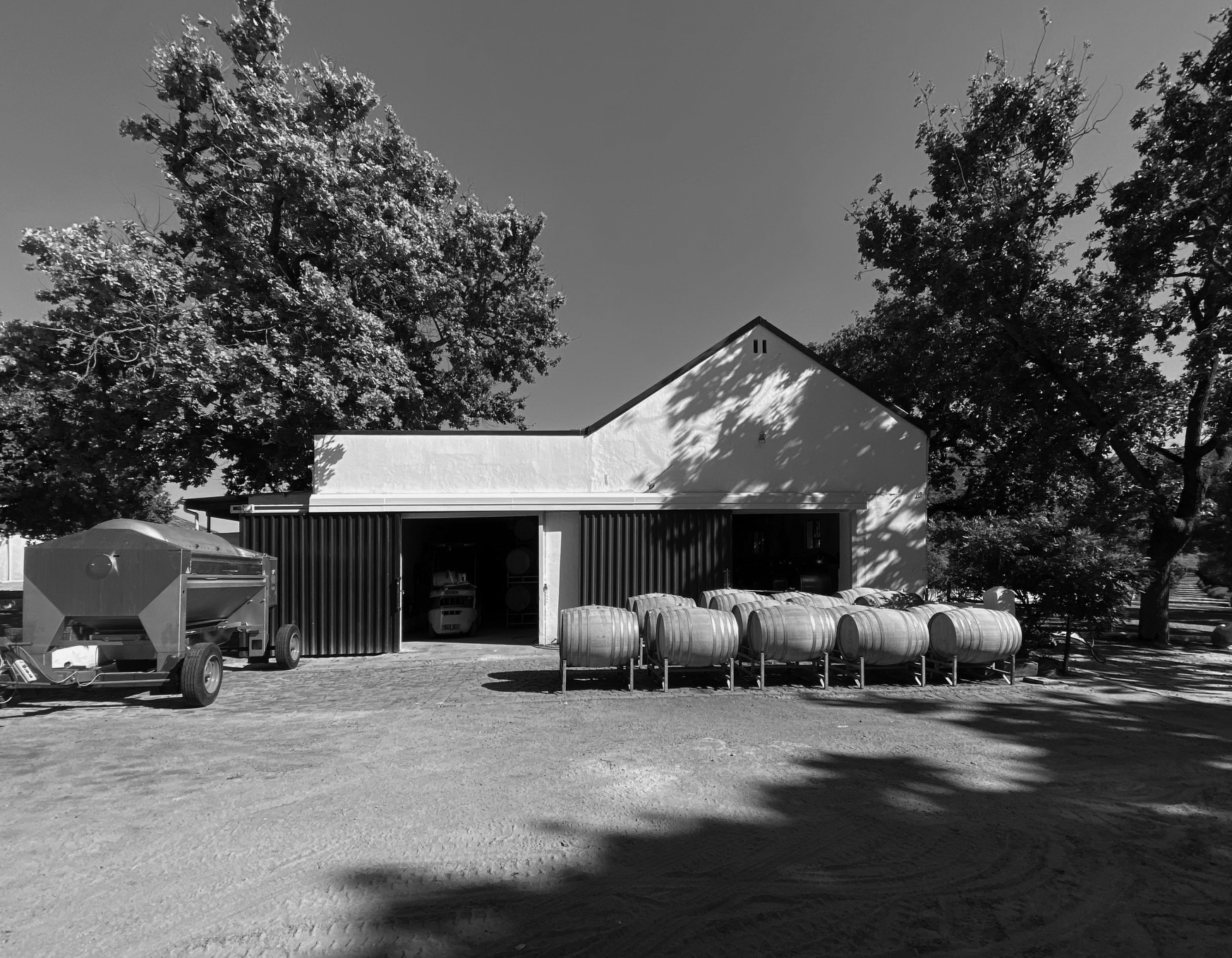 The grapes for the 2001 Syrah came from the Cape Town side of the Bottelary Hills in Stellenbosch, but with the wine being vinified in Paarl, the wine lost the right to its appellation and could only carry a generic Western Cape designation. The wine had an extended period in oak, not by design, but due to the fact that Chris had a near fatal motorcycle accident in November 2002 which left him in hospital for three months.

The grape source for the 2002 Syrah were as per the first vintage, but with the introduction of an additional parcel from Rhenosterkop in Agter-Paarl. No Platter five star this year, but then 2002 is recognised as a very difficult vintage in the Cape. However, I thought the wine was always more elegant and refined than the more flattering 2001.

The 2003 Syrah was vinified at Delheim during his brief tenure there, with grapes continuing to come from the same two vineyards. The difference, however, came with a 3% addition of Viognier, introduced in the form of lees, where Chris believed it acted as a fining agent, adding brightness and helping to lift the Syrah fruit profile.

The 2004 and 2005 were both produced at Meerlust (from the same two vineyards). At this time, a decision was made to hold back the release of the Syrah in order to give the wines a little more bottle-age before they came to market. Until this point, were selling out prior to them really being at the peak of drinkability.

Between 2006 and 2016, the fruit source changed, coming from a single estate on the Helderberg, not far from Meerlust itself. There was a hiatus on production in 2013 after 2014 after the Helderberg farm was sold and Chris lost access to the fruit. The Syrah appeared again form the same site in 2016 only for production to halt again with no 2017, 2018 or 2019 being produced. From 2020, the Syrah is likely to be sourced from the vines at Staart, but could also evolve into a Western Cape blend, as there is also a component of Stellenbosch wine now sitting in the cellar.

After initially toying with the idea of continuing to use Viognier as a blending component, Chris decided to retain the wine as a pure example of the variety.

Details on the more recent vintages of Syrah can be found on The Foundry website.

A second red was introduced in 2014 with a parcel of Stellenbosch Grenache planted in 2007. The wine itself was vinified then aged for six months partly in tank, with the balance in older oak. After blending, the wine spent a further 6 months in concrete before bottling.

Like all other Foundry wines, the wine displays much more restraint and is very much European in style. Early vintages included a little Durif to give a little extra dimension to the wine.

We received such great feedback on the first vintage of Viognier, released in 2004. The grapes were bought into the cellar initially as a blending partner for the Syrah but, at the last moment, Chris decided to give the grapes their own identity, fermenting the wine in some second-hand Meerlust Chardonnay barrels. The notoriously frugal Chris jokes that he has no issue with this, since he knew the provenance of the wood and got the barrels at a good price….

The ongoing success of the wine, I believe, has something to do with the fact that the profile is not obviously varietal, but something more complex and mineral. From the start, it has always maintained more restrained and muted style, developing often Chenin-like nuances as it ages in bottle, and displays none of the ‘tart’s handbag’ trait so often associated with the grape.

The 2005 came from Wellington fruit and underwent a part natural fermentation, with one fifth going through malo-lactic. A bottle tasted recently (July 2014) was still in spectacular condition, which only helps proves the durability of the style.

The 2006 Viognier came from the same Wellington site, but enjoying the cooler climatic conditions of the vintage. It too underwent a part natural fermentation.

The 2007 vintage was produced from two vineyard sites, the existing Wellington fruit, blended with a new source in Faure, close to the Meerlust cellar. Chris saw this very much as an experimental vintage, electing to continue with the cooler, more maritime grapes for all subsequent harvests.

Details on each of the follow-on vintages can be found on The Foundry website.

In 2009, Chris bought in a parcel of Grenache Blanc, sourced from Willi Mostert in Voor Paardeberg and elected to ferment the wine using the same techniques as employed with the Viognier. Although a relatively newly planted vineyard, these grapes until now, had been delivered to one of the large wholesale merchants who had failed to take any real interest in what they were working with.

In the hands of Chris, the result was staggeringly good, especially when back-blended with 15% Viognier. The wine had a low alcohol of 12.5% and delivered great linearity and freshness, with the Viognier component sitting on top of the acidity, adding a little texture and varietal interest. The wine picked up a Platter ‘Five Star’ rating at the first attempt. After a swift and someone bullish negotiation, we managed to secure the whole parcel for the UK market for a steal. After the Platter result, the whole industry piled into the vineyard trying to gain access to the fruit. Needless to say the price per tonne rocketed and Chris finds himself now having to stand in line and negotiate with the rest.

Details on the more recent releases can be found on The Foundry website.

In 2010, Chris managed to secure a small parcel of Roussanne (still considered obscure in the Cape) from a vineyard across the road from the Meerlust front gates. This too was blended with a little Viognier and lees from Grenache Blanc which helped to add a different dimension and complexity to this varieties somewhat monotone profile.

More information on the Roussanne is available on The Foundry website.