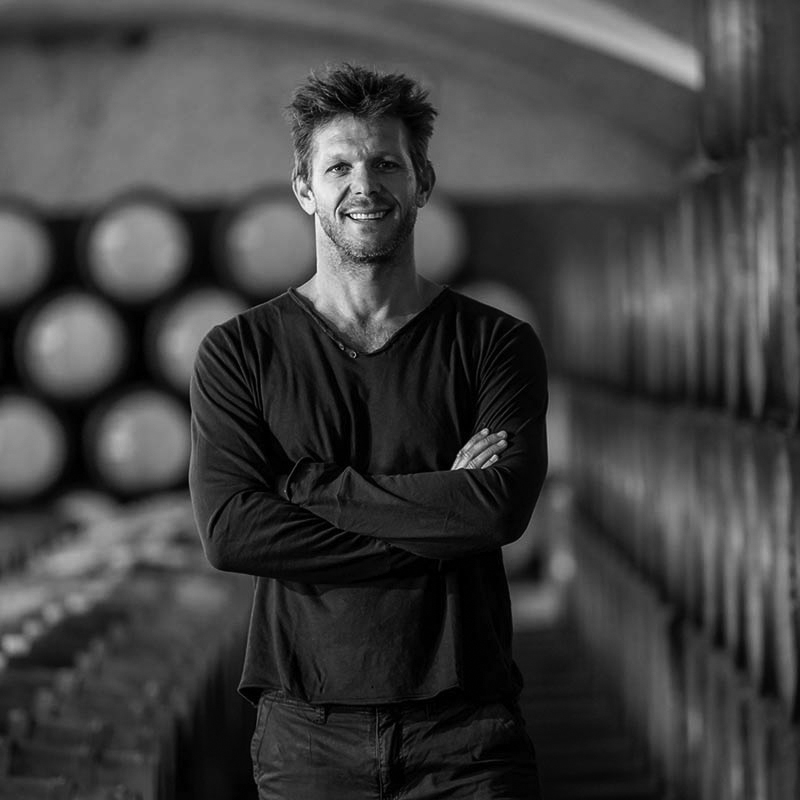 Until May 2018, Miles Mossop’s day job was as winemaker at Tokara, a position he had held since the winery started-up in 2000. The agreement Miles had with GT Ferreira, the owner of Tokara, allowed him to vinify 10 tonnes of bought in grapes and put them under his own label each year. Now completely independent and now making wines in two different locations in Stellenbosch, Miles is starting to extend both production and the range he produces.

Miles Mossop Wines started out as a three-wine project.

The white wine, called Saskia, was first produced in 2004. It has remained pretty constant in its source and the make-up of the blend from the start. It is effectively two-thirds Chenin sourced from 30 year old Stellenbosch vineyards, and one third Viognier sourced from vines farmed by Willi Mostert on the Paardeberg side of the Swartland.

More recent vintages have seen the (beneficial) addition of a barrel or two of Verdelho and Clairette, which with their lower alcohol and well-defined acidity, have made the blend a lighter stricter and more linear. All the components are fermented individually in older barrels and left on its lees for added complexity. Blending is only completed just prior to bottling. The Chenin generally goes through a partial malo-lactic fermentation, whilst the Viognier enjoys a full conversion.

The wine is named after Saskia-Jo, Miles and Samantha’s elder daughter.

In 2006, the accompanying red wine was launched. Max, named after their son, was a 6,000 bottle blend from the 2004 vintage, made up of Cabernet (56%), Petit Verdot (22%) from Bellevue in Stellenbosch, and Merlot (22%) from Zelma Long’s Vilafonté vineyard in Paarl. The wine spent a total of 20 months in 40% new French oak and won a Gold Medal at the well-respected Old Mutual Trophy Show.

The blend for the 2005 was 56% unirrigated Cabernet Sauvignon from Bellevue, 20% Petit Verdot from the same source and (since Vilafonté built their own production facility and Miles was no longer making their Merlot component at Tokara), the source was replaced by fruit from a friend’s farm in Banghoek valley, a relatively cool location off the Helshoogte Pass. This also means that since the source for the Merlot switched, the wine was also entitled to the Wine of Origin Stellenbosch appellation.

Subsequent vintages have all been drawn from the same vineyard sources, although the 2009 and 2010 vintages saw the introduction of a small portion of Stellenbosch Malbec to the blend.

The addition of a third infant to the family (in 2009) naturally resulted in a commensurate increase in the range of wines. Kika joined Saskia-Jo and Max in the guise of a Chenin Blanc Noble Late Harvest, was, until the 2017 vintage, sourced from the same Stellenbosch vineyard as the Saskia fruit. Only one or two barrels were produced each vintage from seven rows of berry-selected and purely botrytis-affected grapes.

The drought year of 2018 saw no Kika being produced, since there was no botrytis in the vineyard. In the same year, the vineyard was grubbed up so, from 2019, the fruit source has switched to an old and consistent block on Delheim.

The resulting wine is light and delicate on the nose yet lush and ripe on the palate, carrying around 180 grams of sugar admirably.

A fourth wine, in honour of Sam comes into the range from the 2017 vintage. The wine is Stellenbosch in origin, with 85% Cabernet Sauvignon from Bellevue and Merlot from Hartenberg. Just two barrels were produced.

As part of the new expansion plans, Miles has introduced three more wines under ‘The Introduction’ label.

The Introduction Chenin Blanc, a concrete tank fermented wine from grapes sourced from the Swartland and Stellenbosch, with a hint of Verdelho and Viognier blended in for added complexity. The wine doesn’t undergo malolactic. The result is a pur, chalky, mineral expression of Chenin.

The second white in the range is Roussanne, sourced from Keemont on the Helderberg. The wine is whole bunch pressed, enjoys a natural-yeast fermentation in old oak where it remains for eight months.

The Introduction Red is based on Cabernet Sauvignon, with the addition of Merlot, Cabernet Franc, Petit Verdot and Cinsault. The wine is designated as WO Stellenbosch, with fruit from Bottelary, Banhoek and Polkerdraai.

This new initiative takes advantage of small, often one-off parcels of grapes that Miles commits to in any one season. The first releases are from the 2019 vintage and these consist of four different chapters. Each of the first white releases equates to a single 400 litre barrel.