Once these vineyards were known as the Coteaux du Roy René, after the last count of Provence to hold court at Aix-en-Provence. Although the King René ceded Provence to Louis XI on his death in 1480, Aix has remained the regional capital.

Vines have grown on these hillsides for centuries. Despite this, in the early nineteenth century Jullien wrote that there was no vineyard to merit the interest of gourmets.

The appellation was only granted as late as 1985 and includes some 49 communes. Nominally, this is the furthest west of any Provence wine. They fall between the river Durance in the north, the Mediterranean to the south and centred on the foothills of the Mont-Ste-Victoire. The vines surround the Etang de Berre to the north-west of Marseille, crossing through landscapes once painted by Cézanne.

A large number of different grapes varieties are permitted. For white: Bourboulenc, Clairette, Grenache Blanc, Sauvignon, Semillon and Ugni Blanc. For red and pink: Cabernet Sauvignon, Carignan, Cinsault, Counoise, Grenache, Mourvèdre and Syrah. Limestone is the dominant soil type throughout. Sometimes this takes the form of blinding white rubble and scree but occasionally melts into clay, sand or gravel.

Today, the appellation is dominated by a dozen co-ops, backed up with some 73 independent growers. Go back 30 years and rosé wines accounted for just 5% of production. Fashion has seen this turn this percentage on its head, with some 95% now vinified pink. To the dismay of some, recent changes in the appellation laws now allow for the blending of red and white grapes to make rosé wine, although it appears that the blending of red and white wine (technically illegal for French table wines) happens sous la table.

Jean and Ann-Marie Salen purchased ‘Les Bastides’ in 1967, even if the creation of the domaine viticole had to wait until 1976, when Jean elected to pull out of the local Puy-Ste-Réparade co-operative. The couple have three daughters, and it was Carole, who joined her father in 1987 and is today responsible for the running of the domaine. The estate was certified organic from the start and one of the earliest examples of bio in the region.

Located 12km north of Aix-en-Provence, the river Durance is almost within sight of the property. Originally 10 hectares, the domaine is now 22 ha in size, with Jean having bought virgin land to plant in the same year that Carole joined her father.

All the vines are planted on north-west-facing collines, within a 4 km radius of the cellar and split over some 25 separate parcels. These fractured plots are mostly surrounded by forest. Three hectares are planted to white grapes: Ugni Blanc, Clairette, Rolle (Vementino) and a token planting of Sauvignon Blanc. The balance is planted to Grenache and Cabernet Sauvignon, which form the basis of their two red wines. There is also a little Cinsault and Mourvèdre planted, which mostly find their way into the rosé. The cooler climate and high diurnal range, means that Mourvèdre struggles to ripen fully, although Carole is backing the variety for future climate change.

The rather rustic concrete cellar was built by Jean in 1974. He clearly knew that he had no future delivering grates to the co-operative. 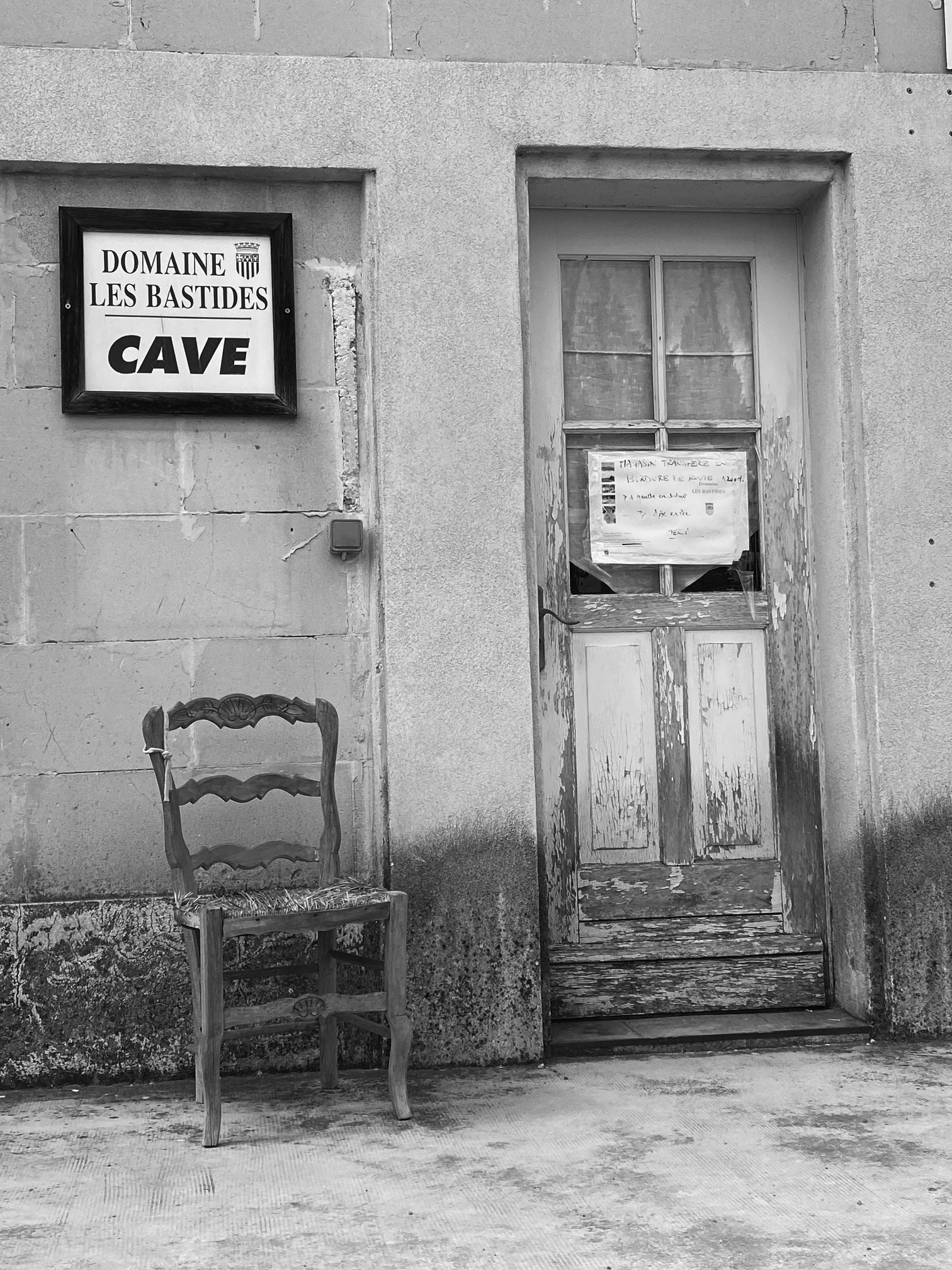 A blend of around one-third each of Rolle, Clairette and Ugni Blanc. Manually harvested and vinified together. Destemmed and pressed softly. Fermentation is with indigenous yeasts in tank, with 5 months ageing on the fine lees before bottling in the spring following the harvest. The result is a savoury, dry white capable of maturing well in bottle.

An equal blend of Grenache and Cinsault with the occasional addition of around 5% Mourvèdre. After de-stemming, the grapes are gently pressed before a seven hour maceration to extract colour and aroma. This is no wimpish pink. The wine takes on a deep and currently unfashionable appearance. Fermentation is long and cool, with ageing in stainless steel until bottling in the spring following the harvest. This is certainly a durable and gastronomic rosé, with a structure close to that of a red wine. It is certainly capable of ageing well in bottle.

A blend of 80% Grenache and 20% Cabernet Sauvignon. Harvested, vinified and aged separately, with blending occurring just before bottling. The grapes are de-stemmed and fermented in stainless steel, before being transferred to 50hl foudre for around 16 months. After blending and a light final filtration, it is traditional to bottle the wine just before the harvest.

This is a vin rouge de garde and produced only in the very best vintages. A blend of equal proportions of Grenache and Cabernet Sauvignon, with a splash of Mourvèdre. Vinified in stainless steel, the Grenache and Cabernet each spend 15 months in 50hl foudre before blending and bottling. Personal experience confirms that Valeria is capable of maturing for in excess of 20 years.

One quite remarkable wine within the range is Le Vin Cuit Selon la Vieille Tradition Provençale. Historically, vin cuit is a wine produced during the harvest and served over the festive period. It is traditional at Christmas in the region to serve a gros souper of fish and vegetables, followed by les 13 desserts, each one said to represent a diner at the Last Supper. In 1975 (the year before he pulled out of the co-operative), Jean researched and re-created the receipe for the Lou Vin Cué. During this period, the production of the wine had been completely abandoned.

Production of the wine, made without the addition of sugar, alcohol or other ingredients is actually pretty simple. After pressing, Grenache grape juice is ‘cooked’ up to 95 degrees C in a cauldron over a naked flame which reduces the volume of the juice by some 25 to 30%. The ‘cauldron’ is an open-top stainless steel tank, heated from below by gas burners. Once reduced, the juice is chilled and allowed to ferment, which usually takes around one month. The finished wine is usually around 12% alcohol with residual sugar in excess of 200g/l. The most ‘technical’ part of the process is the filtration. Given the wine is so viscous, it takes three separate attempts through diminishing levels of filter pads, to achieve a wine that is both clear and stable. Bottled, it is ready for that season’s festive period.