Tulbagh’s history is practically as old as the South African wine industry itself, although it has never been a region associated with quality wine. But, as we’ve seen in the past twenty years, the industry has expanded in a series of concentric circles away from the traditional areas of Stellenbosch and Paarl, and it was only a matter of time until Tulbagh would start to attract a small band of pioneers, keen to exploit the region’s unrealised potential. None more so than Charles Banks who headed an American consortium to acquire (what was then known as) Tulbagh Mountain Vineyards in October 2010. Banks, as you may be aware, was a previous investor in Screaming Eagle.

But, before we go any further, there’s some more recent history to contend with. 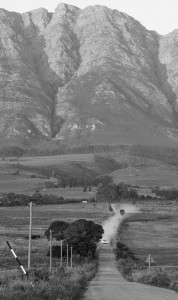 Tulbagh Mountain Vineyards, started life as a brand new venture in January 2000 when fellow Brits, the Scott and the Austin families, purchased this 180 hectare farm on the edge of Tulbagh’s wheat belt. Laudably, their objective was to find virgin land on the slopes of the Witzenberg Mountain range and develop their vineyard along organic or biodynamic principles. No fancy Cape Dutch homestead here, in fact the house they inherited on the farm they ended up buying was quickly re-christened ‘Villa Veriugly’.

The higher parts of the farm adjoins a nature reserve and, at an elevation of between 400m and 500m, was identified as being ideal for the growing of grapes. This site is significantly cooler than the valley floor, and the steep mountain slopes offer shade to the vineyards into the late morning, with the constant breeze ensuring a healthy canopy. The soils are made up of shale and saprolite, providing excellent drainage and endearing the resulting wines with great sense of minerality. The predominantly west facing slopes enjoy the benefit of the gentle late afternoon sun.

The objective from the start was to plant only red varieties and, after extensive research, they settled on Syrah, Mourvèdre and Cabernet Sauvignon as being the most suited to the site. Two hectares each of Syrah and Cabernet were planted in the winter of 2000, with a further 12 hectares, including two of Mourvèdre the following year. Construction of the cellar started in February 2002 and at the same time the search was on to find a winemaker who could share the vision of working the farm organically.

So, between 2005 and 2010, this remote farm, some 100km north of Cape Town quickly became one of the most talked about projects in the Cape wine industry. This had nothing to do with any public relations spin, but purely on the adopted principles of organic farming and the quality of the wines that began to emerge from the cellar. In addition, their own biodiversity programme saw them installed as one of the Cape’s first recognised exponents of the scheme. Even fellow Master of Wine (and natural cynic) Tim Atkin was convinced enough to write ‘I’d go far as to say that this is one of the most exciting new wineries I’ve come across in the past decade’ following a visit to the farm in April 2006.

Having walked the vineyards on several occasions during this period and listened to the various philosophical views myself, I was claiming that Tulbagh Mountain Vineyards was one of the most exciting ventures I had seen emerging from post-apartheid South Africa. But then it all went quiet. Funding appeared to be withdrawn and the rumours circulated that the farm was on the market.

Rebecca and Paul lived on the farm until early 2016 when they left, abruptly, during the harvest. In the autumn of 2016, a circle was completed when Tremayne Smith, who was assistant to Chris and Andrea Mullineaux, arrived on the farm to take charge of the cellar. His first vintage being 2017.

It would be fair to say that there was then something of a hiatus, with a couple of name and brand changes between 2010 and 2014, but one thing has remained constant during this period; the dedication and attention to the vineyards and the quality of the wines themselves.

It was the intention from the very beginning to buy in white grapes from the Swartland rather than to plant them on the farm. Why plant Chenin when there is a massive resource of old vines within a relatively short distance? Tulbagh Mountain vineyards, along with a select band of like-minded producers, helped to create what is now increasingly being identified as South Africa’s signature wine – the ‘Cape White Blend’. Inevitably built on Chenin Blanc at its core, the style has evolved to incorporate a host of other varieties associated with the Mediterranean. This includes Grenache Blanc, Roussanne, Clairette, Viognier and, more recently, Marsanne.

The Fable Mountain Vineyards Jackal Bird – after the local Jackal Buzzards which perch on the strategically-placed raptor posts and help to dissuade the populations of Starlings and White Eyes from pecking at the ripening fruit – comes from grapes purchased widely around the Cape: Chenin from the Swartland, Chardonnay from Elgin and Stellenbosch, Viognier from the Voor Paardeberg and Grenache Blanc from as far away as the Karoo. Raised in both barrel and concrete eggs, the wine goes partly through malo-lactic fermentation.

The 2012 vintage was awarded a ‘Five Star’ rating in the Platter Guide, but white wine production ceased with the 2014 vintage, so that the farm could concentrate on its own-vineyard fruit.

The Night Sky is based on 60% Syrah, blended with 25% Mourvèdre and 15% (of bought in) Grenache, a precursor to the farms own plantings of the variety coming into fruition from the 2015 vintage. Whilst not an estate (or certified organic) wine, it speaks clearly from where it comes, with a real sense of the shale and graphite notes that one has come to expect from wines grown on the farm. There is a real freshness and focus here.

The most impressive wine, however, is the estate grown Syrah. It’s another regular Platter ‘Five Star’ wine, and demonstrates the same freshness and focus as the Night Sky, but with an even greater sense of minerality to the finish. It tastes expensive and yes, it is expensive.

Two more recent additions have been the re-introduction of The Raptor Post. This was initially a one-off release for the UK market during the tenure of the Scott’s and Austin’s, utilising what was redundant (and now grubbed-up) Cabernet Sauvignon that was planted on the farm. Today, the label consists of a Rosé and a Rhône red blend.